Motorists caught illegally using a handheld mobile phone at the wheel are more likely to be sent on an educational course to try to change their behaviour, rather than receive penalty points and a fine, new data gathered by the RAC shows.*

Police forces in England and Wales currently issue a combination of Traffic Offence Reports and Fixed Penalty Notices to drivers who are caught using a handheld phone while in control of a vehicle.* In 2015, across 32 forces a total of 85,564 Traffic Offence Reports (TORs) and 13,984 Fixed Penalty Notices (FPNs) were issued for the offence. Of the TORs that were issued that year, 53,614 (63%) resulted in a motorist being sent on a course.**

The figures are significant as under government proposals announced last autumn, motorists caught from this March onwards will only be offered a fixed penalty, resulting in six penalty points and a £200 fine, or face a court summons – under the plans there would no longer be an option to attend a course as an alternative.

The only location where courses were relatively less popular was in London, with just 40% (8,890) of the 21,985 TORs issued by the Metropolitan Police in 2015 resulting in drivers being sent on courses.

The fall in the number of TORs is consistent with, although less extreme than, the reduction in FPNs issued for the offence, which the RAC highlighted in October 2016.

New research from the RAC suggests that drivers back the change in the law that is designed to put an end to educational courses being offered to offenders – 80% said they backed the move, with 35% saying that they believed the new penalties of six points and a £200 fine to be still too lenient.***

RAC road safety spokesman Pete Williams said: “These new figures highlight just how popular educational courses have become for police forces and motorists, and suggest that the majority of forces believe that education can be effective at getting offending drivers to think twice about illegally using a phone at the wheel, rather than just prosecution.

“But the approach taken across much of the country is sharply at odds with the direction the law is taking. The Government has announced that from 1st March, any motorist caught should not be offered the chance to go on a course – they should instead be offered a fixed penalty of six points and a £200 fine, twice what they would receive today.

“The RAC believes urgent focus is now needed to ensure as much is being done as possible to get drivers to change their behaviour. We support the much tougher penalties that will be introduced from March, and would like to see this backed by targeted enforcement by police forces across the country.

“But education still has a pivotal role to play in discouraging drivers from using a phone illegally in the first place – the fact that courses have been so popular indicates that informing motorists of the dangers of driving while distracted is still important if we are to eradicate this behaviour.

“Our #BePhoneSmart campaign acknowledges that no single action alone can bring an end to the handheld phone epidemic that has gripped the UK. What’s needed is concerted action by the Government, police forces, road safety groups and motoring organisations working together to tackle the problem. We need to make the use of handheld mobile phones as socially unacceptable as drink driving. Crucially, all of us as individual motorists must take responsibility for our actions when we are behind the wheel. It really is time to stop this reckless behaviour.

* Source: RAC Freedom of Information request to all police forces in England Wales. Of 43 total forces, 32 responded to the RAC’s request.

** Polices forces use a mix of Fixed Penalty Notices and/or Traffic Offence Reports for enforcing a variety of traffic laws, including the specified offence of using a handheld mobile phone at the wheel. Where a driver receives a Traffic Offence Report, the decision about how the offence is dealt with lies with an individual force’s traffic bureau – and a TOR gives a police force the option of sending a driver on a course, which an FPN does not

More than 6,000 motorists have been caught at least twice for driving while distracted, including using a mobile phone, in the past four years. Figures released by the Driver and Vehicle Licensing Agency in response to a Freedom of Information request by the Press Association highlight the problem of repeat offenders. 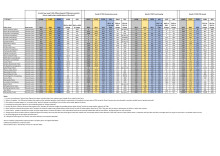 Includes details of number of Traffic Offence Reports issued and number of times these resulted in motorists being sent on a course, receiving a fixed penalty or being summoned to court