In response to calls by Chief Constable Suzette Davenport, (ACPO lead on roads policing) for stiffer penalties for business drivers who use hand-held mobile phones at the wheel, RAC Business spokesperson Simon Peevers says: “The fact is there are too many motorists in general that still use hand held mobile phones while driving and there is a real need to change that behaviour. Whether people are driving for business, going to the shops or doing the school run, the distraction caused by hand-held phone use can lead to disastrous consequences.

“It is right that the Government is currently carrying out a consultation into how to change that behaviour because the challenge has been how to enforce the laws we currently have, which have been in place since 2003, banning all use of hand-held devices while at the wheel.

“It may be that the threat of a driving ban is a better deterrent than points and a fine, and worthy of consideration; but rather than set a higher level of punishment for certain drivers the law should be equal and clear for all drivers and crucially, more effectively enforced. In fact the 2015 Report on Motoring, 79% of drivers said they wanted to see more effective enforcement of existing laws.” 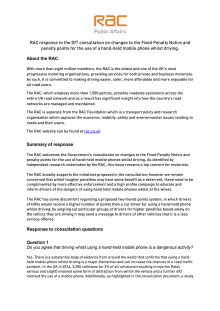 The RAC has published its response to the DfT consultation, which closed on 15th March 2016