Following an announcement by the Department for Transport which explains how £220m of funds will be spent tackling pinchpoint congestion on major road in England, RAC roads policy spokesman Nick Lyes said:

“The Chancellor’s Budget announcement on the £220m to tackle pinch-points on the national road network is simply an allocation of funds first announced in the Autumn Statement last December.

“That said, it is good news for motorists that some of the worst congestion on our major roads is to be dealt with. While the Government has in place a long-term Road Investment Strategy, this cash is really about focusing on areas of the network which are chronically congested. It also shows that the Government has listened to the concerns of motorists about congestion getting worse, something we highlighted very clearly in the 2016 RAC Report on Motoring.

“We hope that the schemes in question prove to be fit for purpose and that they really do get traffic moving again. Motorists will be fairly unforgiving if they have to endure more delays while the work is carried out only to find there is little improvement once they are complete.” 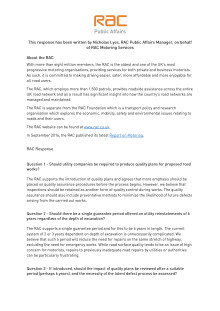 The RAC's response to the Scottish Government consultation