Drivers’ dependency on the car has jumped in the last year with a third (33%) of motorists – the equivalent to 13.2m – saying they are more reliant on their cars now than 12 months earlier, compared to just 27% in 2017, research for the RAC’s annual Report on Motoring has revealed.*

Data from the comprehensive study of motoring trends now in its 30th year shows car dependency had been dropping steadily since 2012 when 31% of motorists said they were more reliant on a car than the year before. The latest figures show the UK as a nation is now more wedded to the car than ever.

Of those who said their reliance on their cars has increased in the past year, 14% said they were much more dependent – a statistically significant rise of 5% on the 2017 figure – whereas the proportion who reported no change dropped by 6% to 55%.

The report, which is based on a representative survey of 1,808 motorists, also found that the percentage of drivers whose car use has increased in the last year rose for the first time in four years. In 2018, 27% of motorists say they are using their cars more than the year before, while only 18% say their use has reduced – this is in stark contrast to 2017 when the percentages were 20% for increased car use and 24% less car use. This means there has been a 12% shift from less to more car use, which represents 4.8m drivers.

“At a time when there is so much effort being put into tackling air quality issues and congestion, it is alarming to see that dependency on the car is actually the highest we have ever seen.” 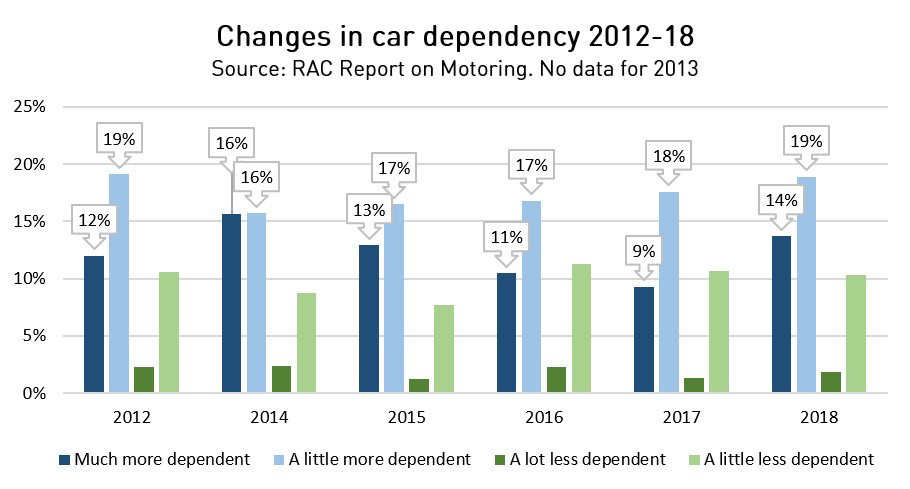 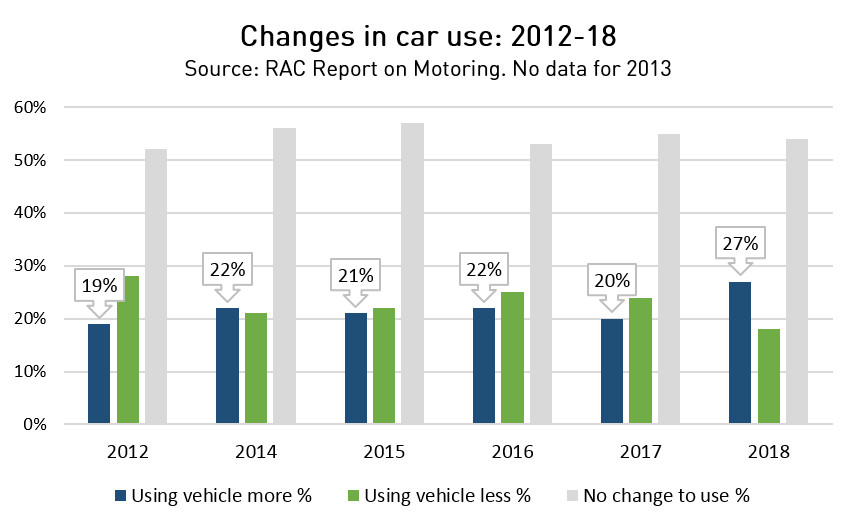 Reasons why people are driving more

The top reasons people gave for using their cars more were having a greater need to transport family members (34%), having a longer commute (32%), and family and friends having moved further away (27%).

But a significant 24% blamed a deterioration in public transport services for using their car more often, with 44% of this group blaming public transport reliability, 39% higher fares and a third (33%) saying it was due to cuts in local services. This claim is supported by a report from the Campaign for Better Transport**which found local authority funding in England and Wales for bus services had been cut by 45% over the past eight years and 3,347 routes have been reduced or withdrawn.

Government data also shows people are taking fewer bus journeys than 10 years ago.*** On top of this, rail commuters have recently suffered large-scale disruption to services in several regions with the Office for Rail and Road this week reporting delays on the rail network are the worst for 12 years.

Motorists would use public transport more if it was better 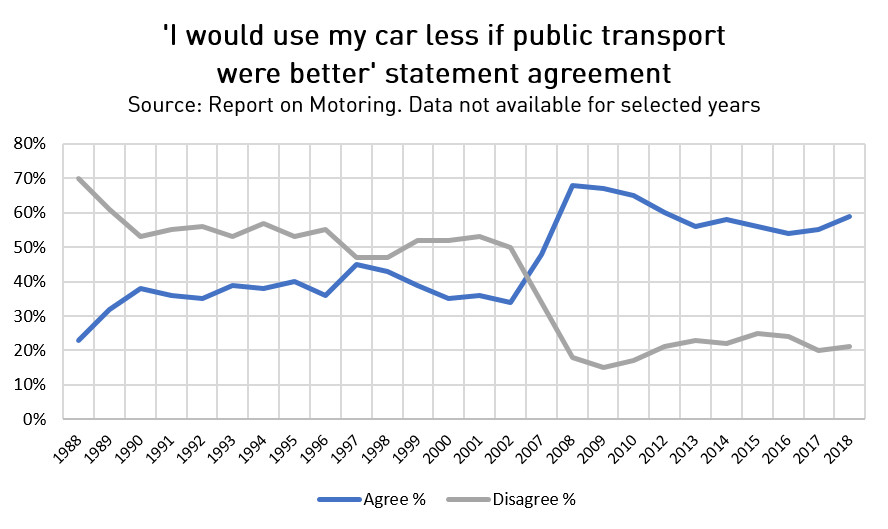 In 2018 those who claimed they would use their car less if public transport was better were asked why they don't currently use public transport more. Forty-five per cent said fares were too high (rising to 62% among young drivers aged 17-24), 42% said services don’t run when they need them to, 40% said they aren’t close enough to where they live or need to go and 39% stated they don’t run often enough, while a frustrated 31% claimed they don’t run on time. Other popular reasons included 25% saying both that services are too slow and too crowded, and 16% claiming there were too many cancellations.

75% would find it difficult to be without a car

Three-quarters of the motorists surveyed (75%) said they would find it very difficult to adjust their lifestyle to being without a car – a figure that has remained high since the first Report on Motoring was published in 1989 when it was 79%. When asked why, almost two-thirds (61%) said the car was essential for transporting people and going shopping, while 49% need one for seeing family and friends who live further away and for 23% there is simply no other way for them to get around due to where they live.

The expense of public transport was also a factor for a third of the motorists surveyed (33%) who claimed trains were more expensive than driving and a fifth (22%) who said the same about buses.

Fifty-one per cent of motorists questioned agreed they were frustrated by the lack of feasible alternatives to using a car for short journeys they make in contrast to only 22% who disagreed with this statement and 26% who were undecided.

“While there is much talk about improving public transport, the reality is very different as buses and trains are not meeting public expectations, and in fact in some cases have actually gone backwards.

“Our research clearly shows many people don’t think public transport offers a viable alternative to the car for their needs, especially those living in more rural areas, 84% of whom say they would struggle to adjust to a car-free lifestyle in contrast to 70% of urban dwellers. There is a definite willingness among motorists to use public transport more if only it were better. Consequently, people end up driving by default as they feel public transport is either too expensive, non-existent or just doesn’t go where or when they need it to.

“It is particularly frightening to think we have fewer people travelling by bus in 2018 than we did in 2008. We need greater investment in public transport so that where feasible, drivers have an alternative to sitting in traffic and contributing to poor air quality and congestion. And the key to this must surely be making public transport as attractive as possible by ensuring it is reliable, frequent, comfortable and affordable.

“We must make it easier for public transport to be used on the journeys that the majority of people make most often. At the very least there should be comprehensive park and ride schemes operating in every large city, removing the need for commuters to clog up city centres simply trying to get to and from work. We should also reverse the current trend and make more rather than less cash available for councils and combined authorities to improve bus services, in both urban and, particularly in, rural areas.

“While rail use is clearly popular, for the vast majority of people the most likely alternative mode of public transport is the bus. It is therefore essential the Government maintains strong investment in the UK’s roads – as buses, as well as cars, cyclists, and even trams, rely on good quality roads.

“But judging by the findings of this year’s RAC Report on Motoring the car, however it is powered, is here to stay.”

“The message coming from motorists is clear: if they have public transport which was more reliable, cheaper, or in some cases just available they would rather use that than the car. The case for investing in sustainable transport and boosting rural public transport cannot be any clearer, with even car drivers wanting better public transport so they can move away from the car.”

“With the UK’s air pollution a daily headline, there has never been a more important time to shift short journeys away from cars towards healthy, clean alternatives such as getting around by foot or on bike.

“One in four car trips are under two miles – a distance that can be walked or cycled.

“The research by RAC is a reminder to governments at all levels to take urgent action and prioritise the development of safe and high quality walking and cycling routes, alongside engagement programmes, to enable more people to walk and cycle.”

The RAC is encouraging drivers to make small changes, where feasible, to help cut overall car use and the resulting congestion and pollution. Below is a list of possible actions:

“Many will be surprised that a quarter of all car journeys are under two miles****. For most of these short journeys, there may be a practical alternative to the car. By opting for the alternative, drivers will help to reduce congestion and pollution, and may even improve their physical and mental health.”

* Research for the RAC Report on Motoring was conducted by Quadrangle using an online survey of 1,808 motorists who hold a full, current driving licence, drive at least once a month and who have a motor vehicle in their household. The research was carried out from 2-18 May 2018.

Committee of MPs calls for reduction in car use - RAC reaction 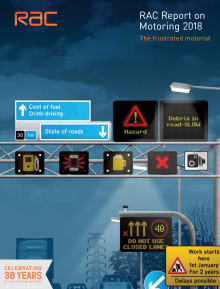 The complete 2018 report from the RAC, including a foreword from Wing Commander Andy Green OBE