August saw yet another rise in the price of both petrol and diesel meaning that prices have gone up for eight of the last 12 months making both fuels 13p more expensive than this time last year, new RAC Fuel Watch data reveals*.

Pump prices continue to creep ever upward with unleaded increasing by 1.65p to 130.59p and diesel by 1.32p to 132.19p in the month. A year ago, however, petrol was 117.51p and diesel was 118.37p. Sadly, the combination of a weaker pound and an oil price of over $70 a barrel has sent prices shooting up. In the past year only the months of June, February and October have given drivers a little respite at the petrol pumps. And it was worse for diesel drivers with nine months of increases.

The average price of petrol in the UK is now at its highest since the end of July 2014 just before the price of a barrel of oil began to freefall and diesel is at its most expensive since the beginning of October the same year. The very important costly difference for every driver, however, is that back then oil was $106 a barrel and the pound was worth $1.70.

Now, in stark contrast, oil finished August at $77.54 while sterling was only worth $1.29 which means both petrol and diesel are far more expensive for retailers to buy on the wholesale market. So despite the lower oil price, the substantially weakened pound has caused fuel prices to reach their highest levels for the last four years.

RAC fuel spokesperson Simon Williams said: “August was another bad month for motorists and it’s rapidly becoming a horrible year on the UK’s forecourts and it looks like further increases are inevitable. Having benefitted from some very low prices two and a half years ago drivers get a nasty shock every time they go to fill up their cars, having to fork out more and more.

“While it’s clearly a tough time for regular motorists unfortunately there is currently no end in sight to the rising cost of fuel. With the pound at such a low against the dollar, and fuel being traded in the US currency, it will only take a moderate rise in the price of oil for some eye-wateringly high prices to be seen at the pumps.

“With many factors at play on the global oil market the price of a barrel could easily break through the $80 mark and stay there. If this were to happen it would be dire news for drivers and we could even see pump prices heading towards the record highs of April 2012 when petrol hit an average of 142p a litre and diesel 148p.”

Pricing – what has happened to UK pump prices since September 2017

The North East and Scotland suffered the largest rise in the price of unleaded in August at 1.81p a litre. Northern Ireland once again had the cheapest petrol at the start and end of the month, closing August at 129.38p but the East Midlands had the smallest a 1.45p a litre. In the South East unleaded was the most expensive across the UK at 131.46p.

Diesel went up the most in the North West and North East, increasing by around 1.48p a litre. Northern Ireland experienced the lowest increase at 99p as well having the cheapest diesel at 131.77p a litre. Unsurprisingly, the South East also had the dearest diesel in the land at 134.03p.

The RAC's fuel spokesman explains what could happen to UK petrol prices if the oil price were to rise further, as JP Morgan has suggested 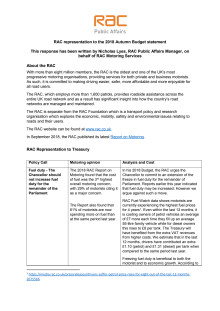 The RAC submitted its representation to the Treasury ahead of the 2018 Autumn Budget.