More than half a million potholes were reported by members of the public to local authorities in Britain for repair in 2017 – an increase of 44% on two years earlier, according to data obtained by the RAC.

A freedom of information request* made to the 212 councils in England, Scotland and Wales responsible for roads found 512,270 potholes were reported last year to 161 authorities compared to 356,432 from 152 councils in 2015.

But when extrapolating the numbers to take account of the likely reports from the authorities who were unable to provide the RAC with data, the total is probably nearer 674,229 in 2017**. The 2015 equivalent is 508,651 which represents a smaller increase of 33%.

When looking at the inclusive four-year period from 2014 to 2017, a total of 1,737,161 potholes were reported across Britain but, factoring in those authorities that did not provide data, the figure is more likely to be well closer to 2.4m (2,429,422) over the four years.

“It is shocking to see the number of reported potholes in Britain has risen by nearly 50% in two years. Our own analysis of breakdown data shows the damage suffered by motorists is a constant source of frustration and expense, but the scale of the problem is obviously far greater than the numbers show.

“Perhaps motorists are more inclined to report pothole defects than they were a few years ago, but we believe the sheer size of the increase is further proof the condition of our roads is worsening. With over half a million potholes reported in 2017 and a more accurate figure for all authorities, including those that didn’t provide data, likely to be in excess of 674,000, this is sadly just the tip of the iceberg as thousands will go unreported every year.

“This means road users are then reliant on authorities finding these potholes in their regular inspections and taking action to fix them which in reality is probably less likely to happen. However, when road users report potholes the onus is on the authority concerned to fix them or risk suffering subsequent compensation claims as a result of not doing so.

“For that reason, we urge everyone to report potholes so that motorists, motorcyclists, cyclists and other road users don’t suffer the consequences of poorly maintained road surfaces, whether that’s damage to their vehicles, motorbikes or bicycles, or worse still a collision.”

The RAC’s most recent study of breakdown data for the RAC Pothole Index shows its patrols dealt with 14,220 damaged shock absorbers, broken suspension springs and distorted wheel breakdowns in the year to end of October 2018 which represents 1.5% of all call-outs. This was the second highest percentage ever recorded since the RAC started analysing this data in 2006, with the highest being 1.6% – a figure previously only seen in 2015 (Q3 & Q4) and 2017 (Q3 & Q4).

The Pothole Index, which is the RAC’s long-term indicator of the health of the country’s roads, also shows that it is not an improving picture as the index remains considerably higher than it was in the third quarter of 2017. In fact, with the index standing at 2.63 this means motorists are now more than 2.5 times as likely to have a pothole breakdown than they were 12 years ago. The record high index figure was 3.5 in Q1 2010 when motorists were 3.5 times more likely to breakdown due hitting a pothole than they were in 2006.

Nicholas Lyes added: “Drivers questioned for the RAC Report on Motoring listed the condition and maintenance of local roads as their top motoring concern with many saying the standard of roads is not good enough. They also think conditions have worsened in the last year. Our own data shows that since the third quarter of 2017 vehicle damage from potholes remained constant and there has been no significant improvement over the past 12 months.

“This is no doubt why the Asphalt Industry Alliance estimates the one-off investment required to return local roads in England and Wales to a fit-for-purpose standard to be over £9.3bn.

“In order to bring our local roads up to an acceptable and safer condition, they require long-term ring-fenced funding which the Treasury could do if they were prepared to set aside a fraction of the revenues that motorists pay through fuel duty.”

Drivers can quickly and easily report a pothole on the RAC website.

** The extrapolated figures were calculated by working out an average number of reported potholes per country from the authorities which responded with data. This average was multiplied by the number of authorities in that country that did not provide data.

​Despite the generally mild start to winter RAC patrols still dealt with more than 1,700 breakdowns in the last three months of 2018 that were more than likely caused by potholes or poor road surfaces.

Utility companies could be better held to account for poor road repairs that cause potholes or dangerous road surfaces. The Department for Transport has today announced a consultation that could mean they have to increase their guarantee for road repairs from two years to five. 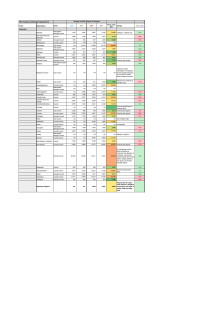 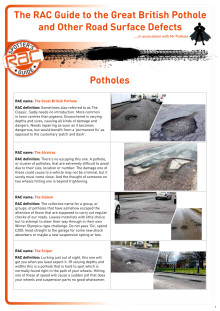 Potholes are a menace to all road users. They create a totally unnecessary road safety danger and cost motorists thousands in expensive repairs. This guide makes a tongue-in-cheek but serious point to the Government: give local authorities enough money to bring all the UK’s roads up to a fit-for-purpose standard. 5p a litre from existing fuel duty revenue over 5 years would raise £12bn.